You may talk of brisk Claret, sing Praises of Sherry Speak well of old Hock, Mum, Cider or Perry; But you must drink Punch if you mean to be Merry.
(18th century song lyric)

To the modern drinker, the word "punch" might imply a trash can full of cheap liquor and sugary mixers thrown together by your friendly local fraternity house, or maybe it's a large cut-glass bowl of mostly juice at a church function. Maybe what you remember is a man-sized carafe of vaguely tropical red sugar water thwarting adult overlords and incurring property damage to the delight of thirsty children everywhere (OH YEAH!)

Historically speaking, punch was booze, punctuated and balanced with citrus, sugar, ice, and water. Possibly a spice or two. That's it.

Turns out, those early punch drinkers were on to something.

Before there were cocktails, there was punch.

According to David Wondrich (we drew heavily on his Punch, the Delights and Dangers of the Flowing Bowl for this missive), punch is the predecessor to the cocktail. The word “cocktail” was first put in print in 1806, but roughly two centuries of balancing sweet, sour, strong, and weak in communal punch bowls had passed by the time bartenders were making modern single-serve cocktails to order.

Aqua vitae and the birth of punch, OR, how not to die drinking straight liquor.

In the early days of European distillation, aqua vitae (literal translation: water of life) became a cost-effective alternative to the wine, beer, and other fermented beverages common in taverns, homes, and on board seafaring ships. Unlike fermented beverages, distilled alcohol is shelf- and temperature-stable and, due to its potency, required a lot less storage space than beer or wine.

Ethanol is a good solvent, so distilled spirits are also easy to infuse with spices, roots, and seasonal produce. This made for both more pleasant sipping and some early good attempts at medicine to cure what ails you (the blurred line between medication and a good time is a common theme in the history of distillation).

But early Renaissance bellies, accustomed to the lower alcohol content of fermented wine and beer, were unprepared for the sheer alcoholic force of aqua vitae, which a 16th century Irish official epithetically referred to as aqua mortis, or water of death, due to its tendency to overwhelm drinkers and, when taken in excess, compromise their health.

Distillers experimented with methods to tame the volatile and often funky distillates emerging from their wood-fired stills, as the spirits tended to contain undesirable congeners and burnt flavorings from the still-evolving science of distilling (uneven heating, lack of filtration, limited theoretical knowledge). Physicians and alchemists often infused spirits with aromatics to temper the unpleasant flavors and tame the alcoholic kick. By the 17th century, what we might describe as early modern mixology emerged as another attempt to balance harsh distilled spirits, and recipes for punch began to appear, particularly in England.

It was the members of the British East India Company who began recording early attempts at punch recipes, with the first known mention in a 1632 letter sent by an Englishman (“I hope you will keep good house together and drink punch by no allowance”). In 1638, a German traveler referred to the “palepuntz” that the English were drinking in India as “a kind of drink consisting of aqua vitae, rose-water, juice of citrons and sugar,” while a French traveler to India a few years later described "bouleponge" which was "composed of arrack... with juice of lime, water and a little nutmeg grated on it; it is quite agreeable to the palate, but it is a plague to the body and health."

Body and health notwithstanding, combining spirits such as rum, brandy, or arrack with citrus and sugar became a prescription for Britain’s navy men to prevent scurvy (blurred lines!), and by 1794 lemon juice and sugar were standard issue in a sailor’s grog rations. By this point, punch was also establishing itself as the go-to beverage for onshore social occasions, and methods of combining spirits with citrus and sugar converged into a popular tradition across Europe by the 1700s.

By the early 1800s, the punch fad had already begun to fade, but punch remains a cornerstone in the collective minds of merrymakers (frats, church socials, and Kool-Aid man inclusive), and the standard punch formula still makes a killer cocktail alternative.

How to make punch like an 18th century soak.

Wondrich refers to punch as “the embodiment of balance,” and that’s partly why punch makers helped usher in the delicate cocktail mixology of today. The pot-stilled spirits that formed the base of early punch recipes were strong, rich, funky... sometimes too funky. Careful measuring and judicious mixing were required to achieve a potable punch; sweetness countered bitterness, spices and fruits, particularly citrus, balanced pungency, and the whole thing had to achieve a Goldilocks-style balance "just right" in the first glass as much as the fifth.

Punch begins with strong liquor. These days it could be almost anything—rum, brandy, gin, arrack, whiskey, tequila—you name it. The rest of the ingredients are simple and readily available.

Building a punch starts with an oleo saccharum, a wonderfully simple oil extraction technique often used for citrus. The technique is easy: layer sugar and peels (no pulp) in a container and let it sit. In time, the sugar draws oil out of the citrus peels and creates an intensely delicious syrup to temper the fiery bite of any spirit.

Tea might be added, spices were often used, and a dusting of finely grated nutmeg was, and still is, a popular and delicious garnish.

But ice and water, the last two ingredients, are not to be ignored, and this is where the punch bowl really comes into its own as the perfect party libation.

Adding something "weak" (water, tea, juice, etc.) to your punch helps proof down the booze, but adding copious amounts of ice has a more marvelous effect, a punch-only bonus that cocktails almost never provide: When the punch bowl is fresh, the brimming punch cups will be strong and full-flavored, the perfect social lubricant for awkward hellos and new introductions. As your guests wend their way back to the bowl for thirds or even fourths, the ice will have done its work, slowly diluting the mixture.

By the time you scrape the ladle for the last time on the bottom of the bowl, your guests should be feeling festive and hydrated, rather than comatose. Three or four self-serve margaritas could land a guest under the table (depends on the company you keep and the appetizers you serve), while three or four glasses of punch will prime your guests for the night ahead. A masterfully built punch is an exercise in dosing optimization.

“It’s not punch if there’s nobody there to drink it.” - David Wondrich‌‌

Punch is best served with good company, and the punch bowl was designed to be dipped into casually, chatted over, and gathered around. This makes it ideal not only for holidays, but for any celebratory gathering where you want a jolly focal point to kick things off. And punch has the added benefit of freeing you, or whoever’s been designated House Mixologist, from hours behind the kitchen counter taking orders and shaking drinks. Mix up a batch or two of punch ahead of time, stock up on ice, and all you have to do is refill the flowing bowl when your thirsty guests drain it dry.

A whiskey punch for making friends and charming enemies.

Our resident bartender, Scott Gohring, created a surprisingly delicate whiskey punch with Maiden Voyage Single Malt that is as easy to throw together as it is impressive to serve. It follows all the basic principles of punch-making—the oleo saccharum works its magic alongside Genmaicha tea, cinnamon, calvados, and the all-important water and ice. You can skip the ice to make the punch ahead of time and store it bottled in the fridge until party time, or you can build the punch as directed below and toss it together before your guests arrive. However you tweak it or make it your own, if you follow the basic guidelines, you’ll have a punch as “moreish” as it’s 18th century counterparts.

“I got the inspiration for this recipe from this imbibe article for something similar," says Gohring, "but their version is a cocktail with pineapple juice and peach bitters—proof that you can make just about any too-complicated cocktail into something arguably better by way of the punch bowl.”

Peel 4 lemons and 2 oranges. Place peels in a medium to large mason jar with sugar (well distributed) and cinnamon sticks. Seal and rest for 16-24 hours.

Make 4 cups of Genmaicha tea and reserve in the fridge.

When you're ready to serve the punch, add the lemon juice to the oleo saccharum jar and shake to combine. Pour contents into the punch bowl. Add the tea, calvados, whisky, water, and enough ice to displace about two thirds of the total volume. Grate fresh nutmeg over top, fill your punch cups to the brim. Be merry!

If you've been a regular reader over the past couple of years, you'll know that we take the opportunity of the post-holiday  January calm to regroup. It follows then, that this first edition of the newsletter helps us reflect on who we are as a business, how the year went,

Hi Folks, 2022 is almost at an end, and we want to thank each and every one of you for your support and engagement over the past year. We've been growing the business and slowly expanding our reach, and we couldn't have done it without you. If you've just signed 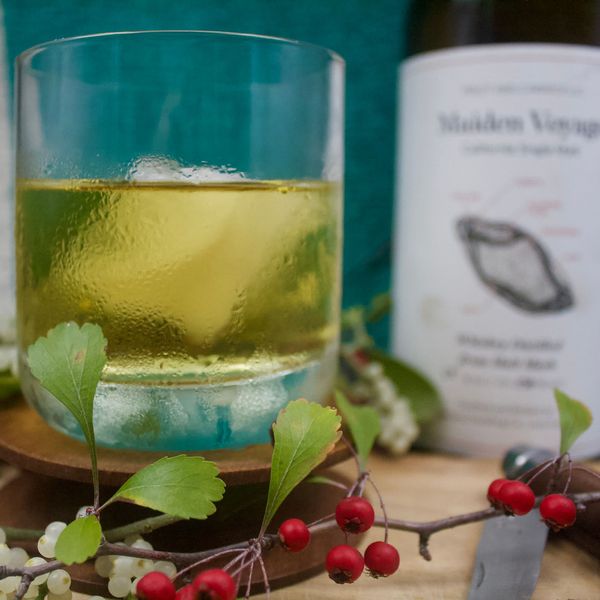 We wrote a header in our marketing meeting notes this week that said, “Holy S*%$#, December is Almost Gone.” True Story. The month is flying by, but as we hurtle towards year-end there is still time to get your final orders in for Christmas, Hanukkah, New Years, and whatever else